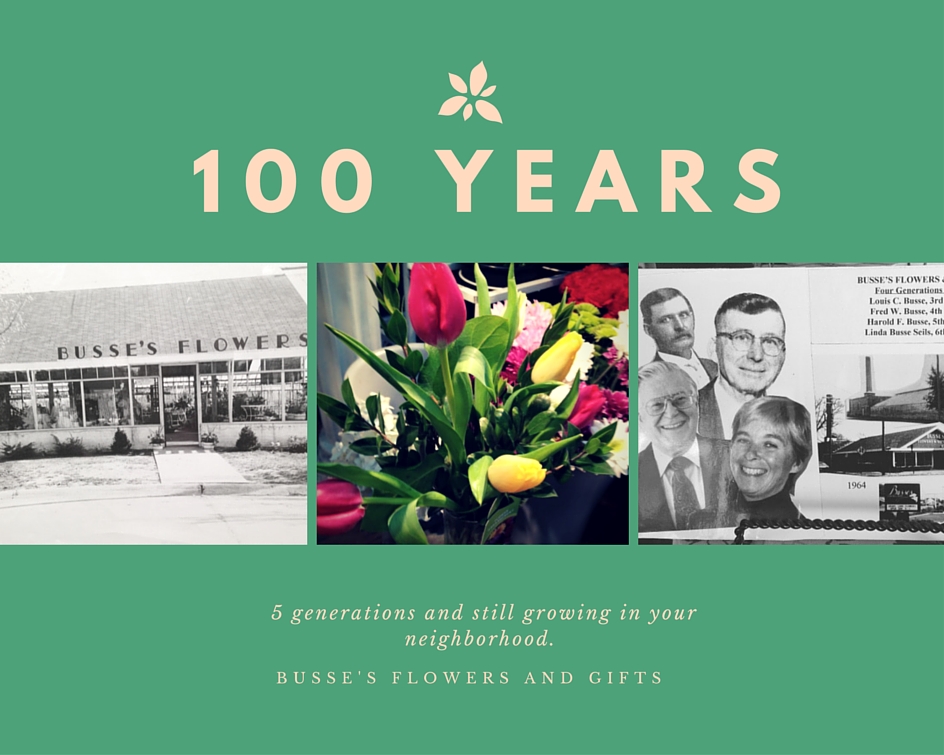 2016 marks 100 years in business for Mount Prospect’s premier florist, Busse’s Flowers & Gifts. Established in 1916, this friendly neighborhood flower shop has been family owned and operated for over 5 generations, and is even a year older than the town of Mount Prospect itself. 4th generation owner Linda Busse Seils took a moment to reflect on a century in business, the shop’s fascinating role in local history and find out what the store has planned to celebrate their momentous achievement this year.

Busse’s Flowers and Gifts is a true family business, through and through.  Established by Linda’s Great Grandfather Louis  and Grandfather Fred W Busse in 1916, the operation began with a few greenhouses, mostly growing and shipping flowers to the Chicago Flower Market.  Throughout their century in business they have remained deeply rooted in the local Mount Prospect community, committed to providing excellent service and beautiful arrangements. Due to this commitment to quality, the small venture experienced an extraordinary amount of success and when Linda’s parents were married in 1947, Harold Busse became a partner in the business with his father.  Around that time, one of the greenhouses was renovated to become a small retail shop. In terms of local Mount Prospect history, the April 1952 opening of the flower shop was a grand affair with 1500 townspeople showing up to celebrate.

The store was remodeled again in 1964 when Harold took over the retail operations of the business. Harold's father continued to grow cut flowers and garden plants that formed the wholesale part of the Busse's Flowers empire.At that time, Busse’s Flowers became incorporated and continued to serve the floral needs of Mount Prospect as well as nationwide. Over time, the shop’s offerings began expanding and giftware, antiques and collectibles were added. As a 4th generation family member, Linda joined the business in the 70s, creating elaborate window displays that delighted customers and community alike. After she attended the American Floral Art School , Linda became the wedding floral designer at the shop and still oversees their bridal services today. As trends changed, the shop was restructured and went back to being the neighborhood flower shop, moving their location to the center of Mount Prospect, where they have been for the last 8 years. Linda attributes their continued success to the foundation of excellent service and beautiful blooms that was built by her great grandfather.

“At Busse’s, most of our business is through word of mouth. We’ve got beautiful flowers and now we’ve got  100 years of experience in making people happy, so we’re looking forward to the next century, too. We love being part of this community and we’ve got a lot planned to celebrate in the coming months, so it’s going to be an exciting year for us.”

Busse’s Flowers and Gifts will be celebrating their 100 years with a very special open house event on April 23rd, 2016- the same day that the greenhouses went up in the Spring all those years ago. There will be food, drinks and several displays that celebrate the history of the store and Busse’s role in the Mount Prospect community. This year they’ll also be reviving the tradition of participating in the Mount Prospect 4th of July parade, so keep your eyes open for a very special Busse Flowers float in the ceremony this summer.

Throughout 2016, the shop will be running several bouquet specials including Throwback Thursday arrangements OR a dozen roses for $19.16.  To learn more about upcoming specials and events, follow Busse’s Flowers & Gifts on Facebook. Drop them a line to wish them luck for the next 100 years on their website.